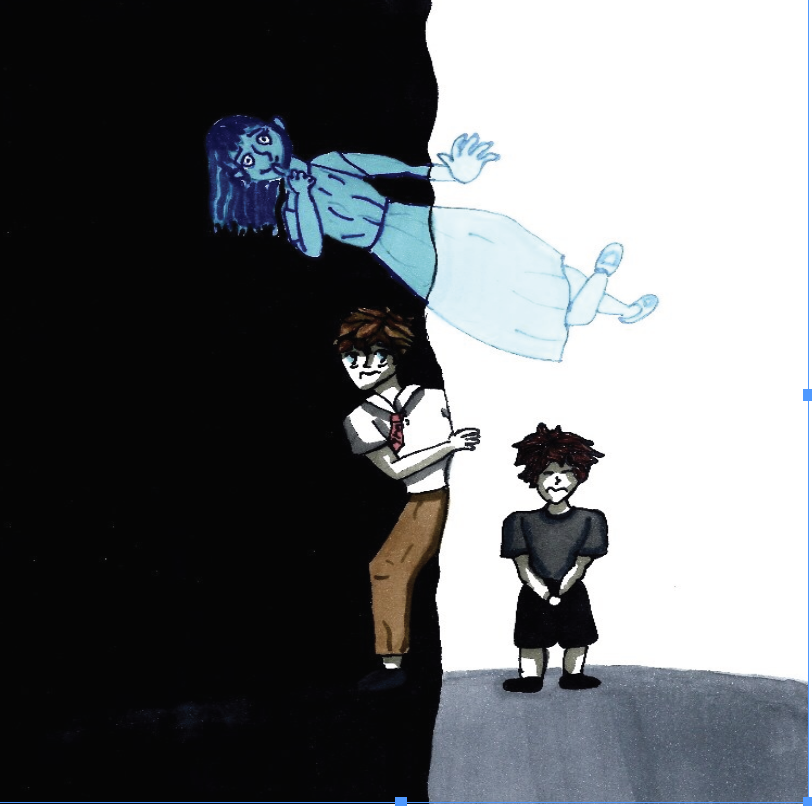 Welcome dear reader, to the story of the century. The halls you walk through each day have untold stories. Many students have heard the screams, seen the ghosts. I invite you to read on and find out  for yourself, That is unless you’re too much of a “Scaredy Panther.”  Continue on, and see an untold chapter, a dark, twisted lesson on West High history.

But before we get into all the blood and gore; I wanted to tell you the true story of Benny Tommis, the boy who haunts a locker room in the field house. Benny always loved basketball and was a very dedicated player on the West High basketball team. However, in the year 1950, the Korean war broke out. Benny being the all-American boy, signed up when he was just 16. He trained, and eventually went over and fought for America, in the Korean war. Sadly, after his eighteenth birthday, Benny was killed in action. His body was brought back to Salt Lake City. Not long after his death West High built the field house and dedicated it to those who died. Yet Benny’s spirit was still there, even though he had never been alive long enough to see the field house. He began to haunt the boys’ locker room, and, during important basketball games, he’s like a good luck charm that helps win. (This story has evidence based on students’ accounts of a spirit haunting the boy’s locker room and the timeline lines up surprisingly well.)

Now onto a new story, one that will send shivers up your spine. Enjoy, and good luck.

The cool blood dripped down his neck. The bulbs illuminating the small cramped space flickered once, twice, and shut off completely. He didn’t want to be here. He didn’t want to relive that horrible moment. But something had called him, urged him, to go. “Some spirit of the west,” he coughed, then grimaced, blood trickling out of his mouth. The boy undid his stupid tie, the one he had been wearing earlier that night, the one that said “Graduating Class of- today!” on it. He hated this place, hated the memories. He couldn’t wait to leave.

It hadn’t been the first time he’d been inside West High, but it was the first official time that the boy had been there. Earlier that day, his mother had told him “not to be a scaredy panther” but that hadn’t changed the mess of nerves. Timid as he may have been, he still had the guts to enter the building. He clutched his mom’s hand tighter, yet for the first time, preschool didn’t seem so scary. Then he entered the room and went to sit down, but then he saw her. A little girl about his age, pretending to sing and dance, and she was … laughing? The girl had smooth, soft skin, dimples, and curly hair wrapped around her pudgy little fingers. She didn’t seem to fit in, too comfortable for her first time being here, yet for some reason, no other children were around her. The boy approached her slowly, step by step, beat by beat, until he was dancing too, and he smiled. The little girl laughed again, then in an angelic voice, spoke up “Don’t Be a scary Panther, come play with me! Always play with me” And the little boy did. After what seemed like ages and ages of joy, the girl muttered something unnerving, “Never leave me scaredy panthery, I always want you to stay” the girl then ran back and began twirling in the pretty little blue dress…

The school year had come to an end, the boy didn’t want to ever leave, and the little girl didn’t want him to go. She grabbed the boy’s hand tugging him to his feet. Shakily, he stood up on his little 4 year old legs, following after her like a puppy dog. She pushed at the wall in their little preschool, and for some reason, it seemed to swing open. This had happened before- whenever they wanted to see and explore the High School stage. This little boy was so young, and let’s be honest, this “girl” was his only friend, anything she wanted to do,  he would toddle along after her So he followed, as they went through the old tunnels up to a dressing room, and down through the orchestra pit. A strange whistling sound began to play, or a moaning loud and long, but the girl didn’t notice. He began to feel uncomfortable with the new route, without a single word between them, the little girl began to sing. “Scaredy panther….Scaredy panther…Your alma mater…Empty of laughter…Scaredy Panther- Join me!!” So the boy joined in the haunting tune, “Scaredy panther….Love to cry…Don’t tell me a lie…Your alma mater…Yes, your alma mater… Hush now Scaredy panther…Your mine!!” Now the boy and the girl were down deep in the tunnel, and a few scarce bulbs were barely illuminating the cramped space. They were off their regular path when they entered a new section, a section deep in under the school that had a heavy, large door. As soon as the boy entered this section, the door locked and closed. He screamed. The lights turned on, and hell seemed to break loose. There were dead bodies, a rope, a knife, a sharp little coin, killing machines, and things he didn’t understand. The boy threw open the door with the strength of a thousand men and ran and ran and ran- until he found his way back to the strange entrance of the tunnel was up out of the dressing room, and he ran the entire length of the school, all the way back to the theatre. His mom was there crying, and all the other kids were looking at him funny, yet no one seemed to even see the passageway he had come through, though it was very much real. The cops and the firemen asked him where he had been and all the boy could say was “the spirit, the spirit.” And he never saw his little friend again…

The boy looked up and saw the face of an old friend. “You-YOU!!” he called. A child’s laugh came from the Ghost, a strange sound coming from something evil. He saw the child’s outfit, the same one as always the same as every time the ghost had met him in preschool. However, he saw something strange about the hem of that blue dress, a ring of names, written in something dark, something dripping. “I thought that you- you were” the boy cried. He tried to scream, but all that came out was a strangled cry. Breathing shallowly, he slowly reached up and he felt the back of his neck.

A hole, no, not a hole, a crevice, about the height of a quarter, and as wide as a sheet of paper oozed dark liquid. His neck, unable to stop the rush of blood leaving his body, was trembling. Finally, the pain hit him like a brick. A thousand needles seemed to be inside him, the fires of hell all condensed in his brain. Like a weak animal under a predator’s gaze, he was rigid, he couldn’t move, couldn’t think. Again, he looked up and saw the girl, the ghost, who seemed to still be around four or so, but with a face that had seemed to age a thousand years since their last encounter.

Growing more and more anxious by the second, he shakily drew his hand away, trying to touch the face of his long-lost friend. Grabbing at the air that had, a second before been a face, his breathing becoming heavier and more strangled with each breath, he made a final effort to figure out what, or who had ailed him. He dropped to his knees and scratched at the floor. He came across a broken bit of glass, but that didn’t seem like it should have caused the damage he was facing. The ghost, hovering mere inches away from the boy, laughed again. Suddenly, in one smooth, well-practiced movement, the ghost dropped the noose around his neck. The scratchy material rubbed against his skin, and he let out a scream. It came out as a gurgle, a hopeless, helpless sound. He felt afraid, still unsure what was happening.

He grabbed the rope, his hands shaking. So this was what it felt like to die, to be murdered. The tears that should have fallen ages ago were nowhere to be seen. He couldn’t breathe, couldn’t see, couldn’t live, couldn’t think. His eyes were unable to see anything but the light illuminated from the creature, quickly he sealed them shut. The cramped hallway reeked, and he wished that he could block out smells as easily as he closed his eyes. His cold lifeless, blue-tinged hands, slick with blood, clenched, and unclenched, clenched and unclenched, again and again.

Again, the boy began painstakingly to raise his hands to his neck. Shaking, covered in sweat, and snot, and blood, and who knows what, his hand reached the rope. It seemed to be an inch thick, a long rope looping around his neck. The more he thought of it the more he realized what it was. As realization dawned on him, he began to jerk around. Without realizing that he would have to see the horrible image of the ghost, his eyes suddenly bulged out, and his mouth coughed up something dark, bloodied, small, and hard… sharp? But that couldn’t distract him. Clawing at the rope, he scratched, not caring about the dirt under his fingernails, or the damage he was causing himself. He pulled! He tugged against the rope, forwards. Big mistake.

As the next wave of pain came over him he tried to scream, but he couldn’t. He continued violently pulling the noose away from his neck, but each time he pulled, the more pain came, and the tighter the noose pulled. The small fibers scratched, his skin, digging in, and widening the crevasse- now whole. He screamed, pulling even harder than seemed humanly possible. The aching, pounding, was increasing tenfold with each tug. He then heard it. An audible snap, an audible break, again and again. It seemed like the world was ending with each snap, each new jolt of pain radiating from his neck. His spinal cord was fractured now, in several places, and the Ghost began to sing around him, the rope so tight it barely let the boy have any oxygen.

“Scaredy panther….Scaredy panther…Your alma mater…Empty of laughter…Scaredy Panther….Spirit of west answer….Can’t wait to die…Your alma mater…Yes, your alma mater- I’ve got your little Scaredy panther… He’s mine!!” And with that, the small, child-like ghost yanked hard, oh so hard on the boy’s noose, closing any hope for his survival. With one last sob, the boy’s body swayed back and forth, in a mesmerizing motion before coming to a complete stop. His last breath may still reverberate around the tunnel “Bewarned the spirit of West.”

So have you heard it? Heard a windy or breathy sound you couldn’t quite explain? A weird flickering of the light? An experience in an unexplored area? Maybe, you’ve seen the spirit of the west. It is said some have even been controlled by an unknown spirit. One second, all the lights are normal, then without a sound, you turn around all so suddenly, and all light is gone. BOOM!! But how did it happen? Seriously how!! Maybe it’s an unknown spirit. Maybe you’re next.